I finally found a rich relative among my mottley crew of ancestors. . .sort of . . .

Most of my ancestors were poorer than dirt . . .and few made it past elementary school.

My sister, who shares my interest in genealogy, and I are trying to find another Revolutionary Patriot. We are obviously in D.A.R. We’ve been researching Margaret Brinkerhoff. She was the daughter of Hendrick Brinkerhoff and Annetje Vreeland. Margaret was born in New Jersey in approximately 1787. She somehow met and ran off with William Wallace and they were married in Trinity Church, an Episcopalian Parish, in 1801. Her family were all members of the Dutch Reformed Church and this may have caused a family rift. If you have visited the site of the World Trade Center Towers or visited the Wall Street area, that is the church they were married in. 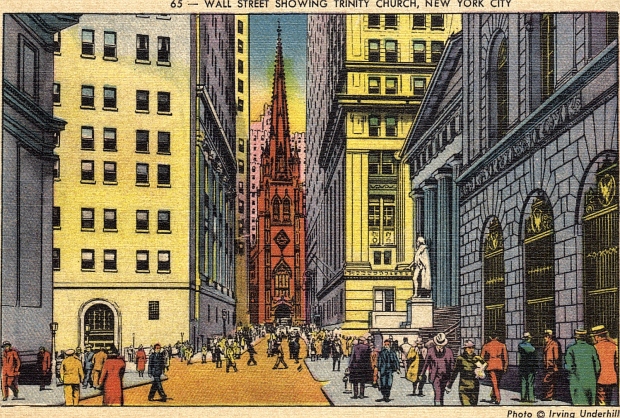 This old postcard is not of the original church. The original church was destroyed in a fire, which started in the Fighting Cocks Tavern and destroyed nearly 500 buildings and houses and left thousands of New Yorkers homeless. Six days later, most of the city’s volunteer firemen followed General Washington north.

But back to my relatives. When you hit a brick wall in genealogy, you go back and try researching lesser players, i.e., children of the people you are researching and their relatives. I was searching obituaries today on genealogybank.com to see if I could find out more about Margaret Brinkerhoff and William Wallace.

But, wow! When I started reading his obituary and finding newspaper articles about him, I saw that he was an extremely wealthy man. OK. . .OK, I confess, he isn’t exactly a relative, but he was the husband of my third great aunt on the Wallace side. So I actually still have struck out on having any wealthy ancestors and only have inebriates, coal miners and the slightly deranged. Sigh.

Obituary of Isaac Lewis, printed in the New York Tribune on Friday, February 5, 1892. 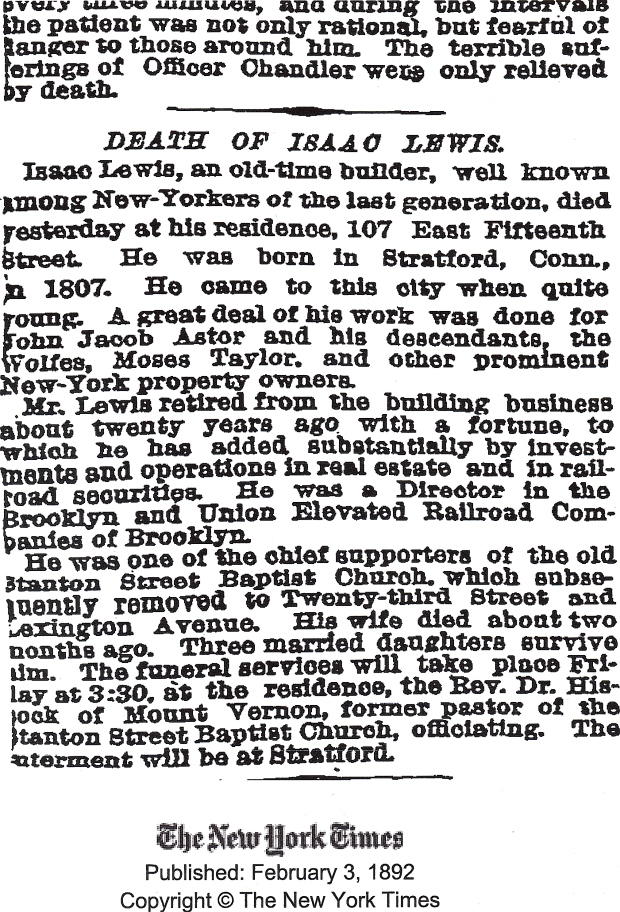 Obituary from The New York Times

Below is what can be found now at 107 East 13th Street, NY, NY. This address was printed in his obituary.

After I found the obituary for Isaac, I found a notice of the sale of his real estate. “The following private sale is reported: Ascher Weinstein has bought nos. 105 and 107 East Fifteenth St. between Union Square and Irving Place. . . .This is part of the estate of Isaac Lewis” 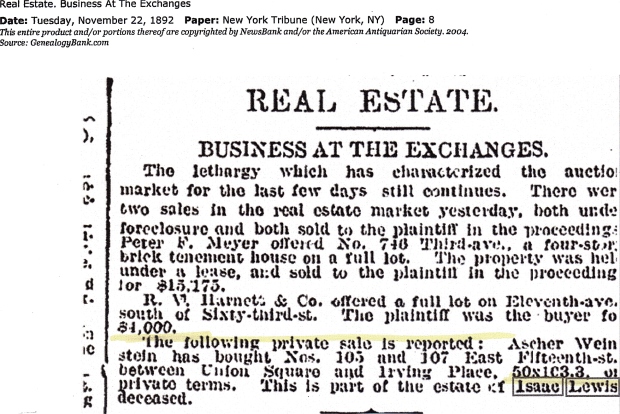 Real Estate, Business at the Exchanges. Printed in the New York Tribune on Tuesday, November 22, 1892.

This area is now part of New York University (NYU), and 107 East 15th Street is where the The Lee Strasberg Theatre & Film Institute is located. And all of this is near my very favorite book store in the entire world — The Strand, which is located at 828 East 12th Street, NYC. No visit to NYC is complete without a trip to The Strand.

But it gets better. Isaac Lewis was a big investor in the “L”. It isn’t the “L” subway line that we know now, but a road to Brooklyn. My daughter and her husband bought their condo in Brooklyn precisely to be close to the “L” subway. The L subway is a straight shot into Manhattan. It is so much faster and easier than a car or a cab. And, voila!, you can get off right in Union Square (where Isaac Lewis lived) and visit The Strand.  And, even better, by living in Brooklyn, they get a tiny bit of outdoor space.  Which is a rare commodity in NYC and Brooklyn.

It kind of makes you wonder about DNA and retained genetic knowledge. I have loved The Strand since I first set foot in it. And my daughter loves the L so much that she moved close to a station in Brooklyn. Strange!

I am going to attach three parts of different articles detailing Isaac Lewis’ interest in the L and the bridges to Brooklyn. Please note that another gentleman named was Senator McCarren. He has a park named for him close to where my daughter and her family lives. 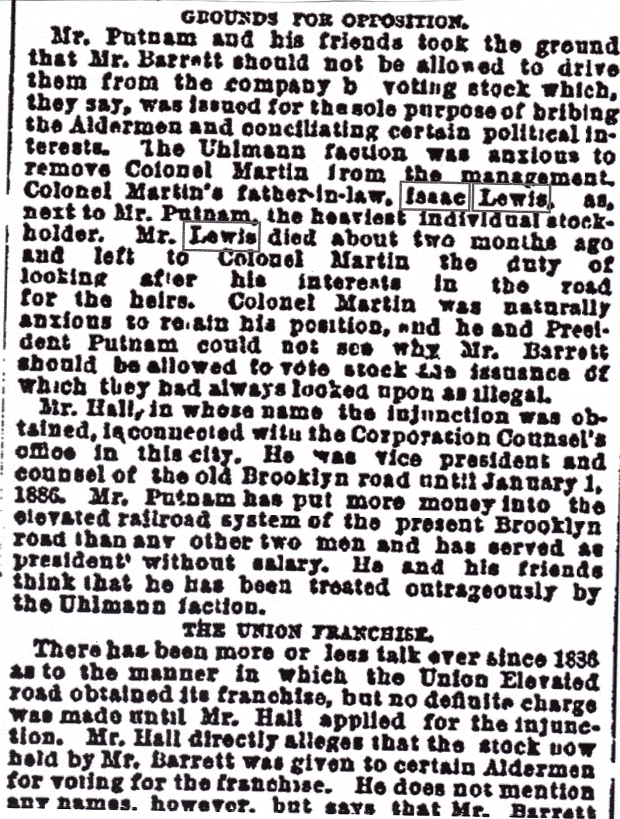 Contentions Resulting from the death of Isaac Lewis 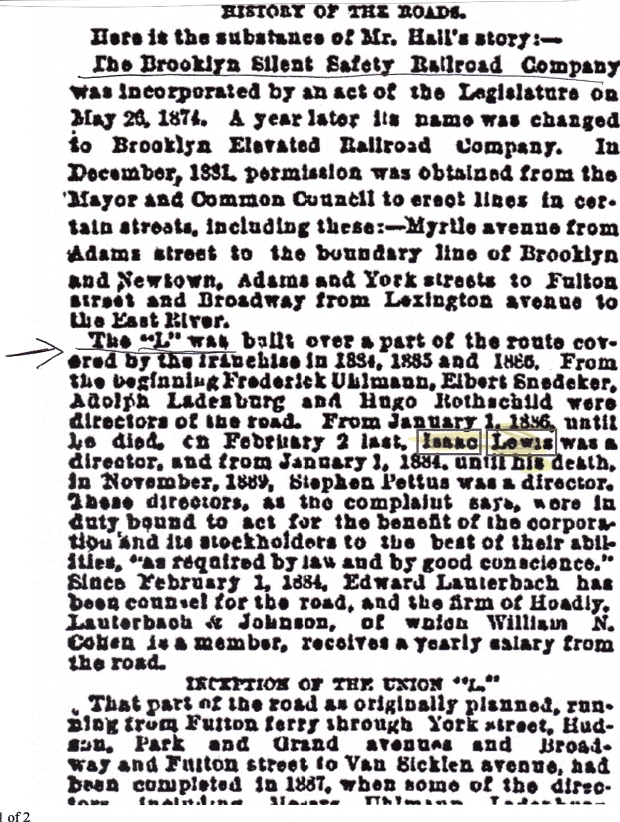 Information about the History of the L 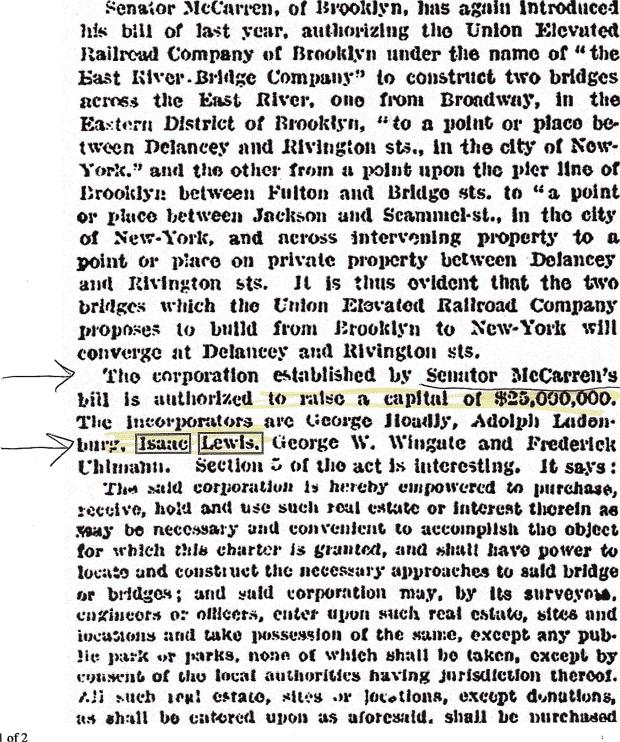 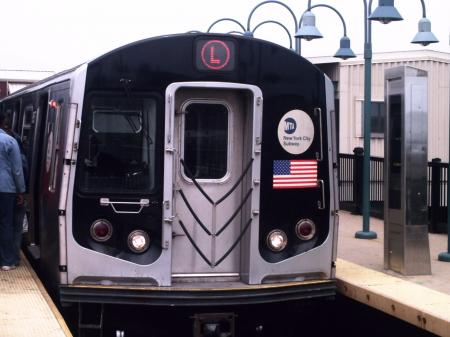 One of my brick walls is finding out what ever happened to William Wallace.  William is my biological 4th great grandfather.

You are the daughter of Grace Adele

Their records are searchable online.   http://www.trinitywallstreet.org/history/registers

I found the date of William Wallace and Margaret Brinkerhoff’s marriage.

Gosh — wonder if Benjamin Moore had a paint factory as well as being an Episcopalian minister?

I’ve found Margaret’s obituary but not William’s.  I found a 1850 census listing Margaret Wallace living with daughter & son-in-law, so I suspect that William had died by that point.  For the first time in the history of the United States census, the census workers of the 1850 census were instructed to record the names of every person in the household. Added to this, enumerators were presented with printed instructions, which account for the greater degree of accuracy compared with earlier censuses.

While searching on the free ancestry search site  http://www.familysearch.org   I found a William Wallace that meets the description that I had been searching for.  He was born in Albany, NY in 1779.  He died before the 1850 census — this one died on February 21, 1848.  But — as I looked at the film, I saw that he died of Typhoid Fever and was buried in Potter’s Field.  Because I knew that William Wallace was a staunch Episcopalian and had a family, I immediately discounted this record because I knew he wouldn’t have been buried in a Potter’s Field.

BUT — today I was reading a book titled “The Graveyard Shift, a Family Historian’s Guide to New York City Cemeteries”, writted by Carolee Inskeep.

In her introduction (page xiv) she writes,

“Please keep an open mind about where your ancestors are buried.  New Yorkers turn up in the least expected places.  Some wealthy New Yorkers are buried in the “potter’s field” because they died of contagious disease.”

Perhaps this is William Wallace, especially if he did die of Typhoid Fever.  I have also found records where Margaret Wallace was baptized as an adult in the Baptist Church, in the Hudson River.  Her love of the Baptist Church is mentioned in her obituary.  Perhaps she never got comfortable with William’s Episcopalian ways.