On the Britt side, Madison D. fought for the Confederate Army.

Madison D. Britt was born April 17, 1836 in Columbus, Muscogee, Georgia. He married Frances A. Vessels. Frances (Fannie) was born about 1835 in Midway, Bullock County, Alabama. I haven’t found how long he fought, but according to the attached record, he enlisted in August of 1862. 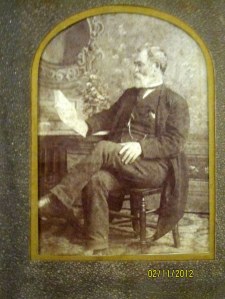