I love all things genealogical.  This (in my opinion) includes old newspaper articles, family trees, memoirs, histories, cemeteries and last (but not least) obituaries.  For a lot of us who aren’t particularly religious, death is scary in its finality.  I can only hope to live on in my good deeds, my offspring, or the occasional joke I’ve told.  Or even better, the ridiculous things I have done.  More people are remembered by their mishaps than the good they bestowed upon their fellow man. Poor Bill Clinton — will be remembered by an anecdote involving a cigar.

Enough said.  Below is a collection of obituaries that I culled today from online sources, including “Google” and http://www.genealogybank.com

Toni Larroux, R.I.P. Your kids were lucky to have such a great mother! 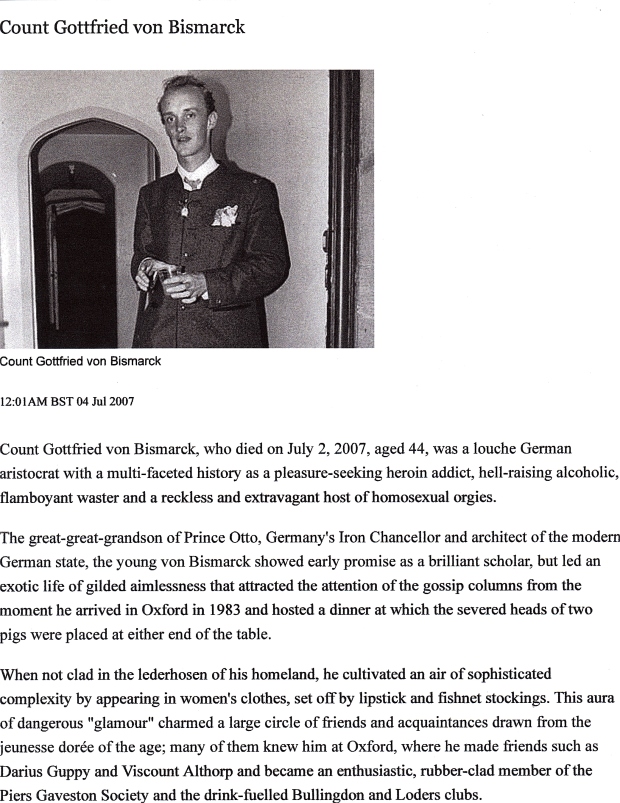 Bye says it all!

If you google “humerous gravestones” or “funny headstones”, or something similar, you will see that a lot of people planned on leaving one last joke behind when they died. I applaud them! Might as well add some levity to a sad occasion. I have taken the liberty of copying some of the best ones and posting them.

“There Goes the Neighborhood” 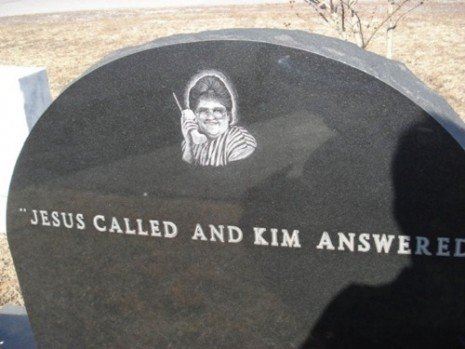 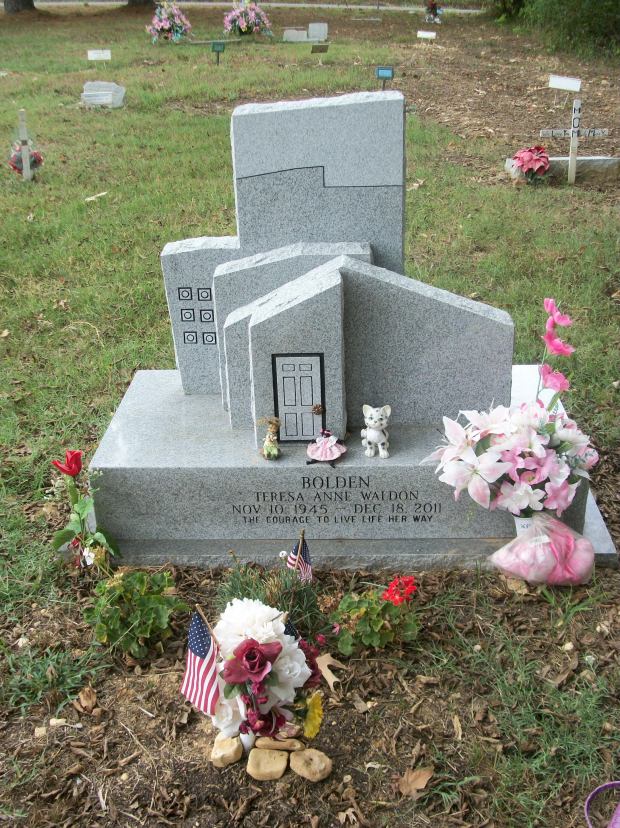 Front of the Bolden Gravestone

Back side of the Bolden Gravestone 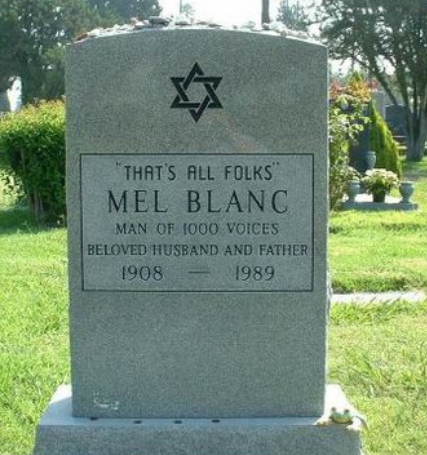 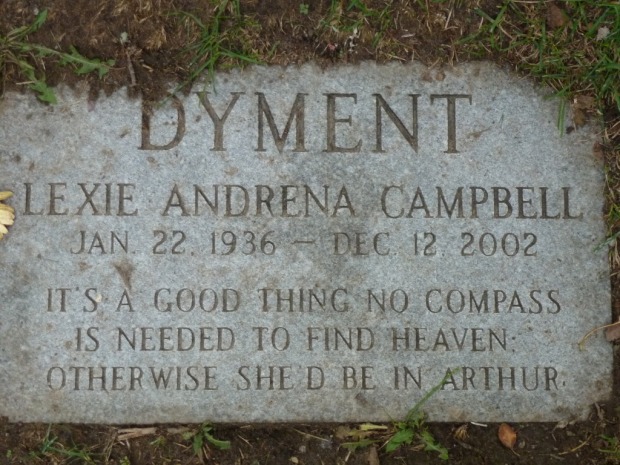 “He was a good husband, a wonderful father, but a bad electrician” 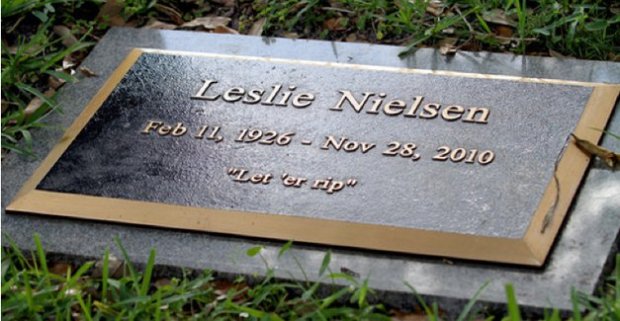 Finally received two Engle death certificates. . .and they proved that my theory was correct

I had guessed that George W. Engle’s father was Louis and that his mother was Philipine, but couldn’t prove it.  Yesterday I received George’s death certificate, and even though it is hard to read, it definitely lists Louis as his father.  His son, Peter, was the informant.  Peter didn’t know his father’s birthday so he lists his age as about 60. His date of death was September 3, 1915. 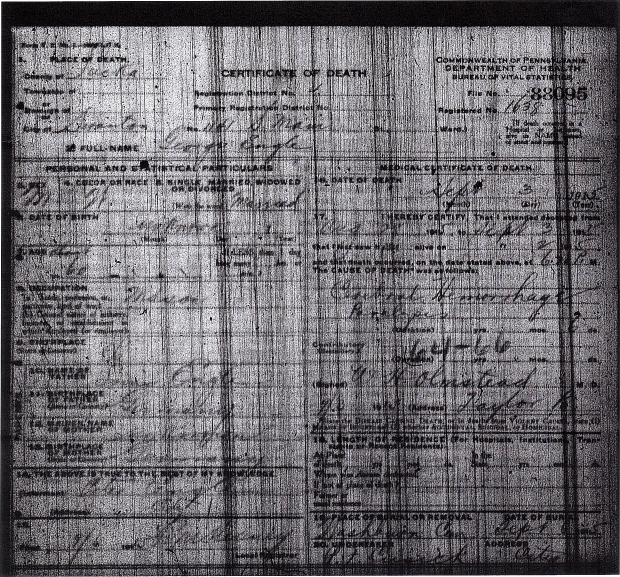 You can learn so much from a death certificate. I had no idea where George Engle might have been buried, but his death certificate lists Washburn Cemetery, Scranton, Pennsylvania as the site.

I also received his wife’s death certificate at the same time. Her name was Martha Carey Engle. Martha lived longer than George and died on May 25, 1928. Their son Peter was also the informant on her death certificate. And she was buried in Washburn Cemetery also. 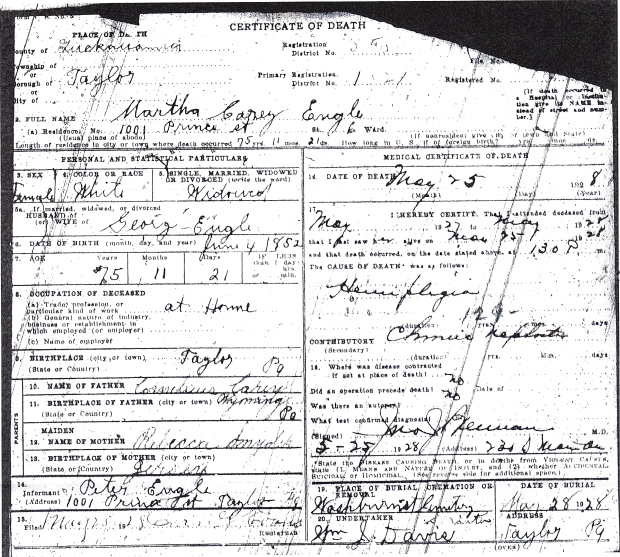 http://www.findagrave.com had no record of their burials, so I added their names as being buried at Washburn Cemetery. I did some fact finding about Washburn Cemetery. Washburn Cemetery is the site for the burials of some of the victims of the Avondale Mine Disaster. The cemetery has fallen into terrible disrepair and neglect. The Genealogical Society of Northeastern Pennsylvania has been working on doing much needed repairs. I applaud their efforts!

The Avondale Mine disaster of September 6, 1869 united a region that consisted of anthracite coal mining cities and towns. Although there were most likely remembrances held subsequent to 1869, the first two in recent memory to honor the 110 men and boys took place in 1994 and 2005.

The 1994 remembrance was conducted by various Welsh organizations and included placement of a memorial plaque honoring the men and boys inside the entrance to Washburn Street Cemetery in West Scranton. This event was followed by a two-day remembrance on September 10 and 11, 2005 at the Avondale Mine site in Plymouth and at Washburn Street Cemetery.

From 2005 to the present much has been accomplished. At Washburn, grave markers were restored and a remembrance plaque was installed near the men’s and boys’ graves where spring bulbs were planted. Near the mine site in Plymouth a Commonwealth roadside marker reminds visitors and commuters of the disaster that occurred nearby.

Our most recent endeavor involved raising funds for the removal of two dead trees located near the men’s and boys’ Washburn resting places. The trees were removed on April 22, 2013.

As part of our continuing efforts to improve conditions around the gravesites, projects include, but are not limited to, placement of a memorial bench, installation of a Civil War remembrance in honor of the Avondale men who fought in that war and are interred at Washburn, as well as purchase of summer flowers and additional spring bulbs that will enhance the Avondale section of Washburn.

Contributions to help cover the costs of these and other projects are being sought. Any amount is greatly appreciated. Checks and/or money orders can be made payable to Avondale Restoration Project and sent to: 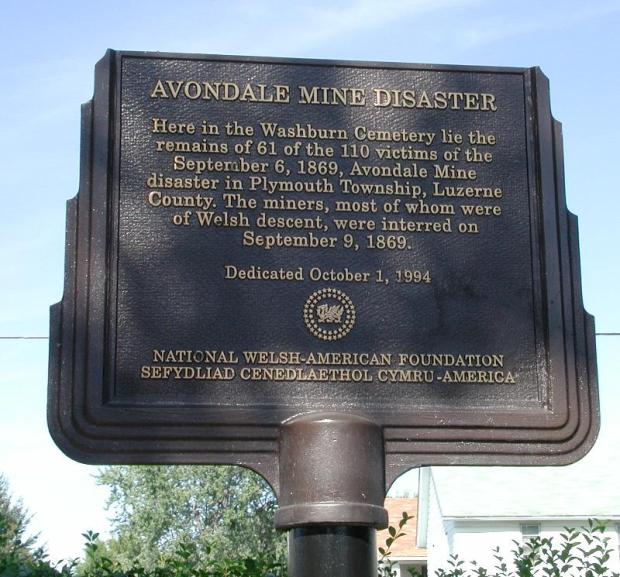 I googled to find out who has the Washburn Cemetery Records and found the answer at rootsweb. The records are held by the offices of the Rader Insurance Co., in Scranton.

Among the early interments on this plot were 69 victims of the Sept. 9, 1869, Avondale disaster, a mine breaker which caught fire just south of Plymouth, PA; 17 of these names are identified in the source one LDS list. Up until the 1930’s an entrance existed on the east side of the cemetery from Filmore street. As with many other cemeteries, ownership has changed hands several times, additional land purchased for expansion, and problems have resulted from some of these changes – lack of maintenance is but one. Official records are held by the offices of the Rader Insurance Co., Scranton, and are organized by plot owner. This office also handles Abington Hills and Shady Lane cemeteries.

Below are some photographs I found on the internet showing the condition of Washburn Cemetery. The photos are from the Facebook page titled “Clean Up the Washburn Street Cemetery”. If you are on Facebook, you can see more photos. Thank you to the person or persons who took these photos. 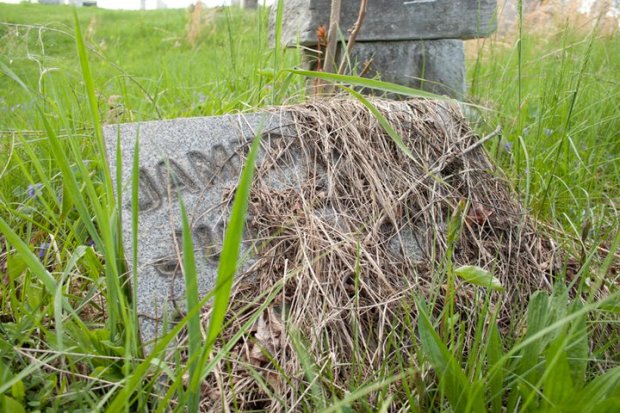 Reading old newspapers online is what I call great entertainment.  Our newspapers now are very cautious about what they print due to our litigious society.  The old newspapers were more like our modern day “Globe” or “Enquirer”, with the exception that Photo Shop hadn’t been invented yet.

The article below wouldn’t have made the newspaper now because no coroner would want to be labeled this inept.

Below is a bizarre rhyming obituary for a baby. Would any newspaper now print that little Jerry died from dysentery? Or old man Fancher died from cancer? There have been some improvements in the press. 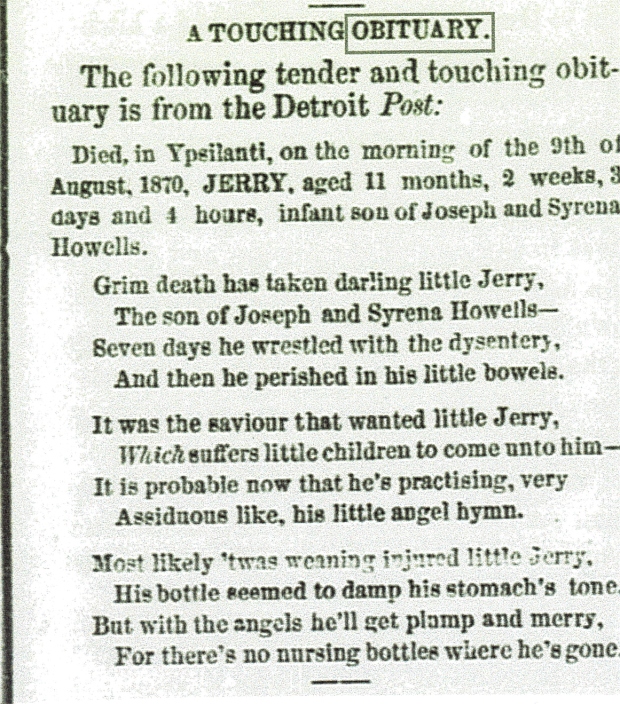 Pic of Mom and Dad in Matilda Loney’s Wedding Album

The following would be a cheery addition to the “Weddings” section of the paper. 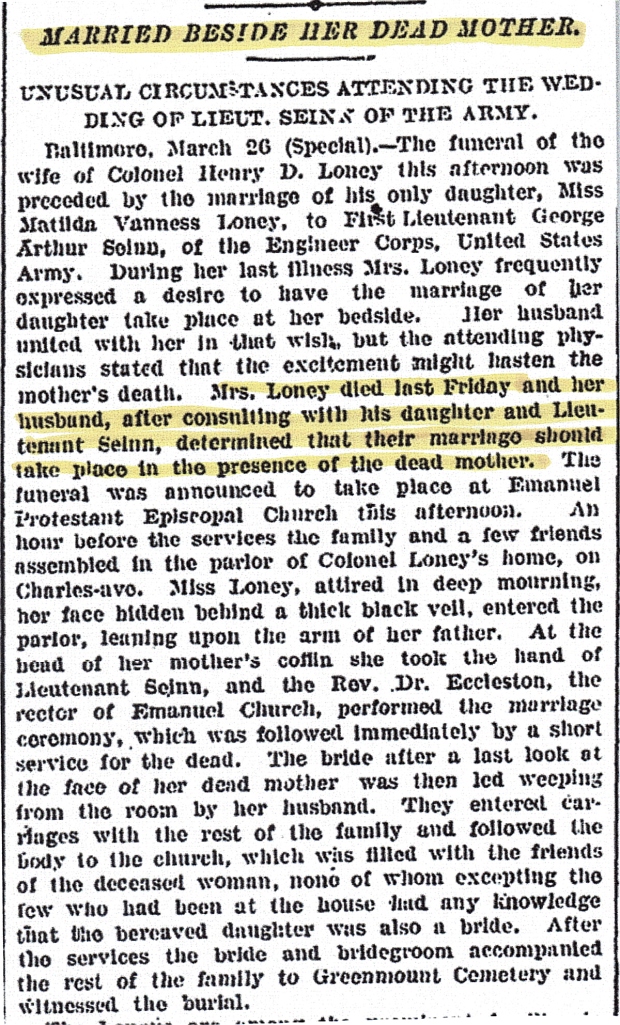 Below is An Honest Obituary from 1916.

And finally, some very unusual causes of death found in various old newspapers.

Time for a break. Let’s have fun reading the Obituaries!

I can’t say enough about how much fun it is to read the obituaries. I am not talking about the euphemistic ones that say that “grandpa is now resting in the arms of Jesus”, but the brutally honest ones. The ones that you can’t believe were really published.

BET SHE WISHES THAT SHE HAD CHECKED HER CALLER I.D.

I’ve taken the liberty of copying some great obits off of the internet . . . 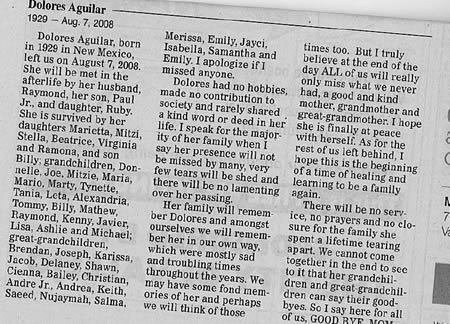 SHE IS PROBABLY HAUNTING THE HECK OUT OF HER FAMILY 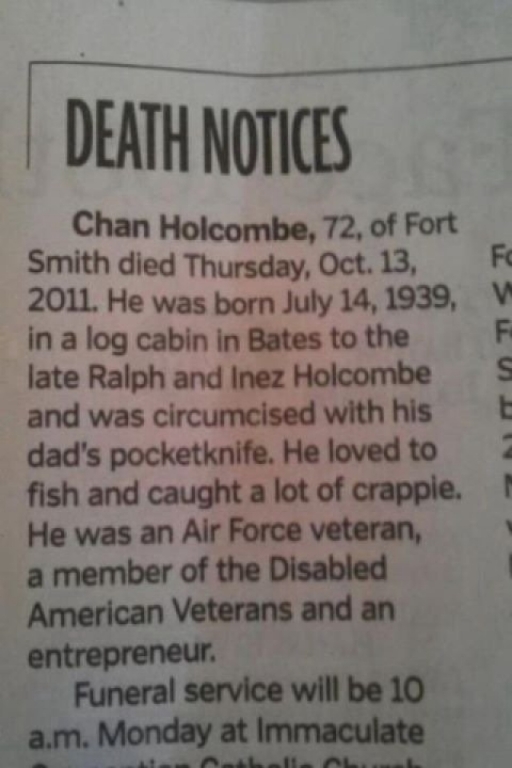 OOOOH, WAY TOO MUCH INFORMATION

SEE BELOW WHAT WAS PRINTED

ABOVE IS THE PHOTO OF “FLATHEAD”

THE FAMILY FEUD IN OBITUARY FORM 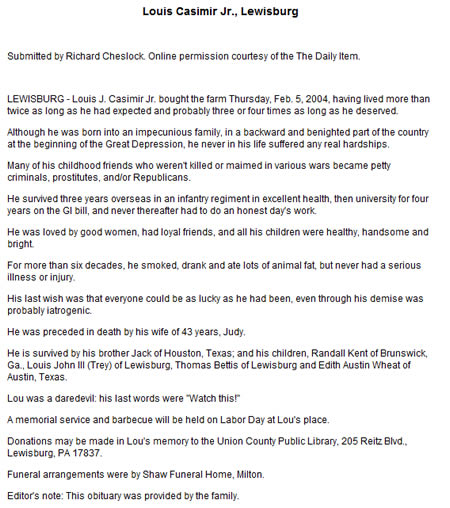 THIS ONE IS A KNOCKOFF OF “FLATHEAD’S” OBIT ABOVE, BUT HUMOROUS

HE MUST BE REALLY DISAPPOINTED RIGHT ABOUT NOW

One of my brick walls is finding out what ever happened to William Wallace.  William is my biological 4th great grandfather.

You are the daughter of Grace Adele

Their records are searchable online.   http://www.trinitywallstreet.org/history/registers

I found the date of William Wallace and Margaret Brinkerhoff’s marriage.

Gosh — wonder if Benjamin Moore had a paint factory as well as being an Episcopalian minister?

I’ve found Margaret’s obituary but not William’s.  I found a 1850 census listing Margaret Wallace living with daughter & son-in-law, so I suspect that William had died by that point.  For the first time in the history of the United States census, the census workers of the 1850 census were instructed to record the names of every person in the household. Added to this, enumerators were presented with printed instructions, which account for the greater degree of accuracy compared with earlier censuses.

While searching on the free ancestry search site  http://www.familysearch.org   I found a William Wallace that meets the description that I had been searching for.  He was born in Albany, NY in 1779.  He died before the 1850 census — this one died on February 21, 1848.  But — as I looked at the film, I saw that he died of Typhoid Fever and was buried in Potter’s Field.  Because I knew that William Wallace was a staunch Episcopalian and had a family, I immediately discounted this record because I knew he wouldn’t have been buried in a Potter’s Field.

BUT — today I was reading a book titled “The Graveyard Shift, a Family Historian’s Guide to New York City Cemeteries”, writted by Carolee Inskeep.

In her introduction (page xiv) she writes,

“Please keep an open mind about where your ancestors are buried.  New Yorkers turn up in the least expected places.  Some wealthy New Yorkers are buried in the “potter’s field” because they died of contagious disease.”

Perhaps this is William Wallace, especially if he did die of Typhoid Fever.  I have also found records where Margaret Wallace was baptized as an adult in the Baptist Church, in the Hudson River.  Her love of the Baptist Church is mentioned in her obituary.  Perhaps she never got comfortable with William’s Episcopalian ways.

Find A Grave — a Wonderful Resource for Family Records

Find a Grave is a wonderful resource for finding family memorials & photos. You can use the link below to do your own search. Also, if you have a digital camera & wish to participate in a volunteer activity, you can upload memorials & photos yourself. As of this date, I’ve uploaded 26 memorials & 7 photos.

Please do a search for your family members! If they aren’t there, you may want to take some photos & add them.