I’ve attached the Death Cert. for Wm. B. Lewis, his obituary and the Lewis Family Plot at Woodlawn Cemetery, Bronx, NY.
It is interesting that cause of death was “old age”. 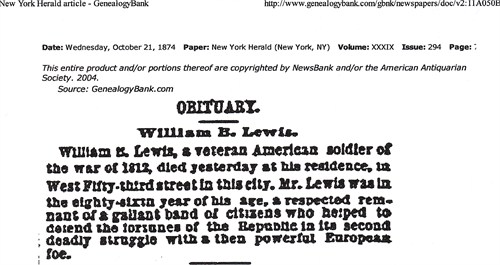 and I am the daughter of Grace A. Britt (I was named Ellen Britt at birth, and Janet K. Page upon adoption)

I sent the following to the Research Dept. at Woodlawn Cemetery —

To the Research Dept. — I have an ancestor to add to your Veteran files.  His name is William B. Lewis and he served in the War of 1812.  He was born about 1788 in New York and died 20 Oct 1874 in New York.  He was originally buried in a private vault in the church yard of the 18th Street Methodist Episcopal Church. The copied article below states that there was a ban on burials below 86th St. after 1851.  But if you look closely at his death cert. it states that he was buried in a private vault at this church.  I can’t explain this.  Also the article is incorrect as it says Woodlawn Cemetery is in Queens.

The following info. was found at this site http://www.nycago.org/Organs/NYC/html/EighteenthStME.html

“The Eighteenth Street Methodist Episcopal Church was established in 1835, making it one of the first four Methodist churches in New York City. A small wooden building on West 20th Street, between 8th and 9th Avenues, provided a place for services. There was a cemetery in the churchyard that was probably active until 1851 when the city banned burials below 86th Street. In 1885, the members decided to enlarge and remodel the church, and to pay for the work they decided to empty the 128 vaults in the churchyard and sell the property. After some difficulty in convincing the families to agree to disinterment, about 300 bodies were removed to Woodlawn Cemetery in Queens. Public vaults behind the parsonage were undisturbed and apparently forgotten.”

Elmira M. Lamb Glaze was born in NYC abt. 1857, the daughter of Chester Lamb & Catharine Malory Lamb. She was raised a Roman Catholic & was one of eight children. Her father, Chester Lamb, was a well known horseman & livery stable owner in NYC. Her father was born in Vermont & her mother in Ireland.

Elmira had lived in a convent before she met & married George Glaze. George was a widower with two children. After George & Elmira’s marriage, they went to live with George’s parents in New Jersey. George’s parents did not approve of Elmira & treated her very badly.

George abandoned Elmira soon after their marriage. Tragically, she gave birth to a baby girl who died the day she was born, 14 Aug. 1879 in New Jersey. It was alleged that George & his parents refused to give Elmira the food she needed for her pregnancy.

George & Elmira’s divorce was covered on the front pages of the New York papers as it was scandalous for this time.

After George left Elmira, she moved home to live with her father, Chester Lamb. The divorce case dragged on for years. Their divorce was finally granted in June of 1893.

On Oct. 6th at 7pm, Woodlawn Cemetery is hosting an event titled “Moonlight & Mausoleums – Walking Tour”.
They will be opening the Belmont, Harbeck & Julliard Tombs to allow walkers to view the interiors.  A reminder — bring a flashlight.

You can check out the event on the Woodlawn Cemetery’s website    http://www.thewoodlawncemetery.org/site/

Chester Lamb was married to Catharine Malory.  Catharine was born about 1819 in Ireland and died on 6 April, 1875.  I haven’t been able to find where they were married or when she emigrated, but it appears that she came to the United States as a child.  Chester & Catharine had eight children that I have found.

All children were buried with Chester & Catharine in the Lamb plot at Woodlawn Cemetery except two, William George & Martha.

Catharine’s obit. published on April 8, 1875 in the New York Herald,

On the 6th inst, Catharine, the beloved wife of Chester Lamb, in the 56th year of her age.  The relatives and friends are invited to attend the funeral, from her late residence, No. 154 West Forty-fourth street, on Friday, 9th at ten AM; thence to the Church of St. Paul, Fifty-ninth street, where funeral services will be celebrated.